It's competition time again!! You could win a pack of notecards featuring this black and white photograph of a stunning side by side shotgun and cartridges. Perfect for writing Christmas present thank you letters. 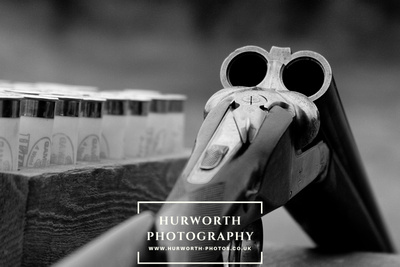 In the run up to Christmas 2012 I ran a giveaway competition via the Hurworth Photography Facebook and Twitter pages to win a pack of 10 Christmas cards featuring this snowy photograph of the Old English Hurworth hounds on exercise in the snow:

Hound exercise in the snow

Being very honest, I was totally stunned by the response to this competition and the support received. So, rather than giving away just the one pack of cards as planned I in fact gave away 5 packs of cards.  The winners were chosen at random and the cards were then posted out around the country.  Out hunting on New Year's Day I bumped into a lady who's daughter had been one of the lucky winners who told me how chuffed she'd been to win.

In the post New Year lull I thought it was time to run another competition.  So as not to constantly bang the fox hunting drum, this time it's a shooting prize - one pack of 10 a6 notecards featuring my favourite shooting photograph from 2012, taken at the J.C.Marsh Sporting Clays Simulated Game day in July.

So how do you win these cards???

The closing date is Friday 1st February and the winner will be announced via the Hurworth Photos Facebook and Twitter pages.